All articles tagged with "Cruel"

Lady Jenna had beef with her ex and she wanted him to learn that he could not mess with her, break up with her and still think he could try to mess her up any further. So she put him straight by turning him into her smoke slave. He had to lick her bare feet and endure high heel trampling as well as being used as a living ashtray by the mistress.

This mistress felt that she had to do some crazy and naughty things and that is why she went ahead to crush and trample this guy. He was a crude guy and she used that as an excuse for what she did to him. He had to endure being a living ashtray as well as being trampled using heels and having to lick the same heels which had trampled him.

Mistress Saida has a great pair of tits and she likes to flaunt them any chance she gets. Today the mistress not only showed them off, but she also used them as bait to torture and humiliate this loser. He was fixated on the tits that he forgot that she was manipulating him and using him. When he came to realize what was happening, it was already too late for him. 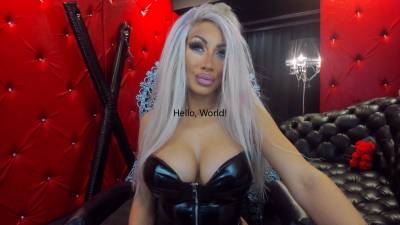 Lady Stefanie and her friend mistress Jenny turned this guy into a human ashtray. But they did not do it the way other mistresses did it. The mistresses used his balls as the ashtray. They knew it would be crueler and it would more painful that way. He was in the pain of a lifetime and he learned his lesson the hard way. He never messed with any of them again.

Mistress Melissa teases guy and uses him as human ashtray

Mistress Melissa wanted to have fun with her cigarette. She teased this guy with her big tits and she made him do all she said and all that she wanted. She wanted to find out if he could be her human ashtray so she asked him. And to her surprise, he agreed and he became her living ashtray. She took advantage of him and she had him do all sorts of nasty things on him.

Mistresses gang up on bully and punish him

Mistress Ava Black and her sister wanted to show this bully what they do to people like him. They brought her sister's boyfriend to help them humiliate him. They undressed him and they took turns burning him with their cigarettes. He was also choked with their cigarette smoke which they blew on his face. He was in pain but by the time they were done with him, he had learned his lesson and promised never to bully again.

Mistress Dorothy and her smoking fetish

Mistress Dorothy wanted to torture this guy so she humiliated him using her cigarette. She has a smoking fetish and she always has a cigarette with her. Today she used her cigarette to punish the guy. She made him lick her feet before she burned him with her cigarette. She also used him as her human ashtray. She stepped on the black soot made by the cigarette and she had him lick it and it stuck on his face.

Mistress Ava Black did not like how this girl failed to satisfy her. She was pissed and had to punish her for wasting her time. She had heard a lot about her and she knew she would be satisfied. She cruelly tortured her using her cigarette. She turned her into a living ashtray before she felt it was enough punishment for the day. The girl was so humiliated that she promised herself she would never disappoint anyone again.

Mistress Emily and her human ashtray

Lady Jasmin and her smoke fetish

Lady Jasmin Black loves to smoke. She smokes any chance she gets and loves her smoke for a variety of reasons. She likes to smoke because it is sexy and she also likes it because it is a conversation starter and she can bond with people over a cigarette. She also likes how it helps her think whenever she wants to make a big decision as well as how she can use it to punish someone by burning them with it. 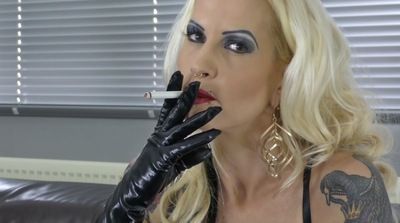